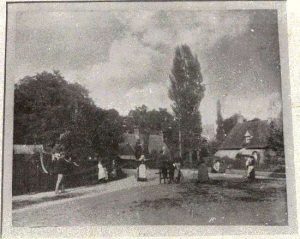 View of Church Lane at around 1900 At the beginning of the 19th century, manorial land was reviewed with some divided into separate plots with a house for tenant farmers of the manor, these were the copyholders  with 30 Fen Road being one of these.  This reorganisation of land by the manor was legally carried out in relation to the Enclosure Act of Parliament.  The Enclosure Act award for Milton was initiated by the lord of the manor and the Rector of All Saints’ and the award was executed on the 8th July 1802.  Evidence for a boundary of Enclosure Act land can be seen today as the bank with old trees (oaks and hawthorns) on the west side of Dickerson’s Pit in Milton Country Park.
Following Enclosure, several farmers who were tenant farmers, particularly the copyholders of the manor, gradually improved their income over expenditure so that they could buy land and become freeholders. One of these families was the Gunnells who were copyholders of 30 Fen Road annexed to the main farm, Willow Farm (demolished for housing in Willow Crescent in the 1960’s) and adjacent to Ambassador Lodge by Pond Green; nearby at 50 High Street is another house, Essex House of similar vintage to Willow Farm, both being built in the early 19th century.

During the 19th century, the older timber framed, thatched cottages were beginning to deteriorate beyond economic repair.  This together with an earlier devastating fire in the village in 1735, saw the beginning of the replacement of these early dwellings by more substantial brick buildings with slate roofs, the bricks arising locally from the Cambridge area brickworks using the blue-grey gault clay.  This clay with added chalk produced a more refined, hard and lighter coloured brick made in Cambridge and Burwell known as ‘whites’.  These bricks are often seen together with dark red bricks forming contrasting patterns in buildings.  In Milton, there are a number of houses with this brick patterning built in the late 19th and early 20th century.  These include North and West Lodge and the boundary wall of the manor, 30 Fen Road and the earlier Baptist Church in the High Street.