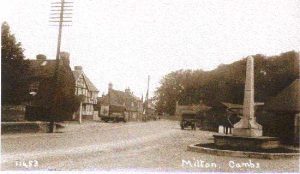 High Street in about 1935, the pond, long since gone, can be seen on the left, with the Waggon and Horses next to it. The war memorial is shown in its original position. The transition from the 19th century to the 20th, and now the 21st century, has brought to Milton its greatest changes in its history.  Technology and two world wars changed the face of the village from a small farming community to a suburban complex embracing industry ranging from gravel extraction to world quality science innovations.  During this time, Milton’s population grew steadily  to over 700 in the 1950’s and to 850 by 1961.  However, in contrast to the increase in population, there was a significant decrease in those working the land from 100 in the early 1950’s to only 10 by 1980; mechanisation involving tractors and combine harvesters reduced the need for manual labour.

Furthermore, there was a dramatic decline in sheep farming to zero in the 1930’s, and dairy farming virtually ceased with the loss of pasture land to housing developments and new roads. As mentioned earlier, the nurseries had closed by 1978.

However, there were some positive aspects of land based industries which came into being in modern times. First, the land at Manor Farm at the junction of the Landbeach and Waterbeach Roads, became the site of Francis Jeeps Institute also known as the ‘Farm School’ in the 1960’s.  Today, the school has expanded to become the College of West Anglia, Cambridge supported by private funding to embrace small animal and equine courses with mainstream farming tuition, some associated with Anglia Ruskin University.

Farmers and landowners with diminishing livestock brought in companies, notably Greens and Dickerson’s to extract sand and gravel providing extra income from their land.  This industry lasted from the 1930’s to the early 1960’s,  providing  the sand and gravel for the inter and post war housing expansion, as well as for the construction of air bases during WW2.  With the extraction of minerals, came the formation of large gravel pits filled with water.  On the other hand with reduction of animal farming and horse traffic, by the 1930’s, the small village pond (now pond green with the village sign) attracted more rubbish than the need as a watering hole for beasts, and so was filled in.

In parallel with the mineral extraction industry, the Milton Industrial Estate started around 1955. By this time the first housing development after WW2 arose at Bene’t Close.  This was soon followed by almost continuous  housing development through the 1960’s to the present day as follows: Goding Way 1960, Coles Road and Old School lane estate, early 1960’s, new houses in Church Lane, Willow Crescent and Cherry Close, mid 1960’s, Shirley Close then Pearson Close and Court, 1970’s.  Also in the early 1960’s, the Ely Road was built across the western end of the Milton Hall grounds to take the increasing traffic on the A10 trunk road, straight through village.  This necessitated the removal of the war memorial at the junction of the High Street with Fen Road, to its present site in Coles Road.  Hall End arose off Fen Road after the old school was demolished  in the early 1970’s; the new school in Butt Lane had opened over a decade earlier.

Major road developments occurred around Milton in the mid 1970’s. First, the A45 dual carriageway relief road (later A14) passed between Milton and Cambridge, the route between the village and the city requiring the present roundabout over the A14.  Linked to this, the A10 from Cambridge to Ely became a new road as the A10 bypass at Milton.  These major road developments came at a time when the Cambridge Science Park was developing on land owned by Trinity College within the Milton parish.  This just preceded the vast Milton Park development of the Rowans and the Sycamores in the 1980’s where the nurseries had been, with later extensions to the north of Butt Lane involving Humphries and Fromont Way’s housing development.  All this development doubled the population of the village as illustrated in the census returns:  1981 (1,720); 1986 (2,000); 1991 (4,100); 2001 (4,275).

During this time important amenities arose in Milton. These included the Community Centre (1986), a new doctors surgery and a veterinary practice, Tesco supermarket (1989) and Milton Country Park (1993) which consisted of naturalized gravel pits and pockets of old pasture land once belonging to farms no longer in existence.  The Milton Park & Ride opened in 2009 on farmland near the junction of the A10 bypass and Butt Lane.  Pedestrian and cycle access to the Park & Rise is via a bridge over the bypass.  Similarly, a distinctive pedestrian and cycle bridge follows the line of the old  A10 road to Cambridge by being erected over the A14.  This is the ‘Jane Coston’ bridge named after Milton’s long standing parish and county councillor who has been honoured with the BEM for her devoted work on behalf of the village.

The most recent housing development at North Lodge Park was completed in 2015. This development  occurred on land once belonging to Milton Hall.  The Hall itself after WW2 became the regional Eastern Electricity office and the land immediately to the north contained workshops  and training ground for outside maintenance workers. Privatisation of government utilities, led to the French company EDF taking over the land from Eastern Electricity, and eventually sold the site to the housing developers Bellways who named the development after the existing North Lodge, once a lodge to the Hall.  Landscaping of the development included restoration of the Humphrey Repton lake and the adjacent field east of the housing was made into football pitches with a pavilion for use by the village.  Of interest, is the field east of the football pitches known as Long Meadow, this is private land north of Hill Close, once belonging to Milton Hall.   Here is the site of one of Milton’s known important Romano-British farmstead settlements.  Milton Hall with its extensions has been occupied by various high-tec businesses since Eastern Electricity left;  the businesses have ranged from Clive Sinclair’s early computer production, notably the ZX  Spectrum and C5 vehicle, to more recent mobile phone technology.